It is an article of faith among many mainstream experts that poor posture, lack of core strength, and/or structural abnormalities such as bulging discs are major causes of pain, especially back pain. A further assumption is that by working to correct these issues, through stretching or strengthening, or postural retraining, or surgery, pain will decrease. It is probably fair to say that the majority of physical therapy and corrective exercise done in this country is based on exactly these assumptions. Although these ideas have a common sense appeal, there is significant evidence questioning this approach. Here’s a brief review of the conflicting evidence.

You have probably heard the claim that bad posture causes back pain, or that you should try to improve your posture to get rid of low back pain.

You can find this claim all over the internet – from physical therapists, chiropractors and personal trainers. If you do a Google search for “posture and pain,” you get 4 million hits.

With so many posture police on patrol, it is a near certainty that you will sooner or later be told by some authority that your posture needs work.

For example, if you go to a physical therapist with low back pain and a large curve in your low back, you may be told that you need to correct this by sucking in your gut, squeezing your glutes, tucking your tail, or strengthening your core. If you have upper back pain and a sunken chest, you may be told to pinch back your shoulder blades, strengthen your scapular retractors, stretch the chest, and raise the sternum.

These ideas have intuitive appeal and are advocated by numerous experts. But are they supported by evidence? And should you spend time trying to analyse your own posture and make corrections? Let’s look at some evidence that might help us answer these questions. 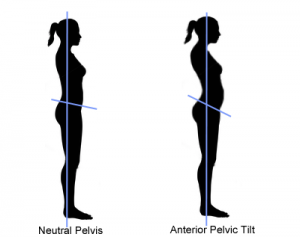 In one study, researchers looked at the posture of teenagers and then tracked who developed back pain in adulthood. Teenagers with postural asymmetry, thoracic kyphosis (chest slumping) and lumbar lordosis (overly arched low lack) were no more likely to develop back pain than others with “better” posture.

Another study looked at increases in low back curve and pelvic angle due to pregnancy. The women with more postural distortion were no more likely to have back pain during the pregnancy. A systematic review of more than fifty four studies found no good evidence of a correlation between posture and pain. Leg length discrepancy seems to have no effect on back pain unless it is more than 20 mm (the average leg length difference is 5.2 mm). Hamstring and psoas tightness do not predict back pain.

These results are particularly striking given that many studies have quite easily found other factors that correlate well with low back pain, such as exercise, job satisfaction, educational level, stress, and smoking. Although some studies have found a correlation between back pain and posture, it is important to remember that correlation does not equal causation. It may be pain is causing the bad posture and not the other way around. This is a very likely possibility. People will spontaneously adopt different postural strategies when injected with a painful solution. Big surprise!

Based on the above, there is little evidence to support the idea that we can explain pain in reference to posture or that we can cure pain by trying to change posture.

Another common idea is that herniated discs or other degenerative changes revealed by MRI are major causes of back pain. Many people who learn of these structural changes will assume it is the cause of their pain and start to consider surgery as a solution. However, numerous studies show that many types of structural abnormalities are poor predictors of pain.

In one famous study, MRIs were performed on subjects who did not have back pain. Fifty two percent of the subjects had at least one bulging disc or other MRI abnormality for which surgery is sometimes recommended. Given these findings, the authors stated that: “the discovery by MRI of bulges or protrusions in people with low back pain may frequently be coincidental.” In a similar study, MRIs on individuals who had never suffered from low back pain revealed that one third had a substantial spinal abnormality and 20% under the age of 60 had a herniated disc.

In a study of pain free hockey players, seventy percent were found to have abnormal pelvis or hip MRIs, and fifty four percent had labral tears. The author stated that “this study shows the limitations of depending too heavily on an MRI. A surgeon may see something in the image, but it isn’t causing a problem.” 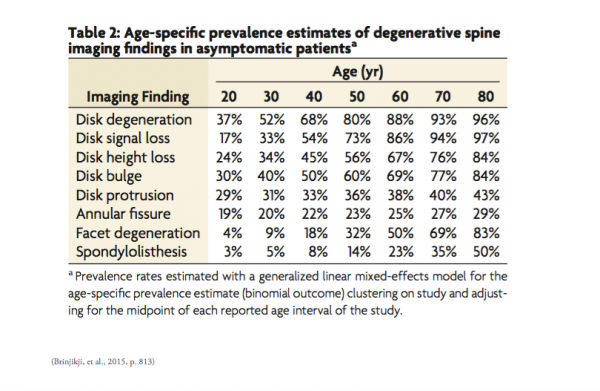 This picture is from a study from 2015 done by Brinjiki et al. It shows the amount of degenerative spine imaging findings in people without low back pain.

This is not to say that herniated discs, or other structural abnormalities cannot cause pain. Of course, they can, and you would rather have less damage than more. But if a large percentage of pain free people have bulging discs, then how likely is it that a bulging disc is the cause of your back pain? If you look close enough at almost any joint in the body, you will find something wrong with it. Don’t assume that whatever shows up on the MRI is the source of your pain.

Core Strength And Back Pain

The idea that good core strength is essential for a healthy back is another ubiquitous idea.
What is the evidence that poor core strength causes pain or that core strength exercises reduce back pain?

Before reviewing the studies, it is first interesting to note that most of life requires only minimal activation of the core musculature. During walking, the rectus abdominis has an average activity of two percent of maximal voluntary contraction, and the external oblique operates at five percent. During standing, trunk flexors and extensors are estimated to fire at less than one percent. Add more than fifty pounds to the torso and they fire at three percent. During bending and lifting muscular activation is similarly low. Given that daily life seems to require so little core strength, perhaps it is not surprising that research interventions to increase core strength have little effect on pain.

Now let’s look at some research. One study showed that core strengthening exercises for pain free persons identified as having a weak core do not reduce the future likelihood of back pain. Numerous studies have been performed to test whether core strength exercises reduce back pain. The thrust of these studies is clear – although core exercise can improve low back outcomes, it is no better than general exercise. The obvious conclusion is that if core strengthening has benefit, it works because of the generally beneficial effects of exercise (or as a placebo), not because lack of core strength or poor firing patterns are a major cause of back pain. In other words, despite what we are told over and over, the current evidence states that there is nothing magic about core strength as means to prevent or reduce back pain.

If you have questions about your back pain, contact us on [email protected]

Reference: Trust Me I'm a Physio 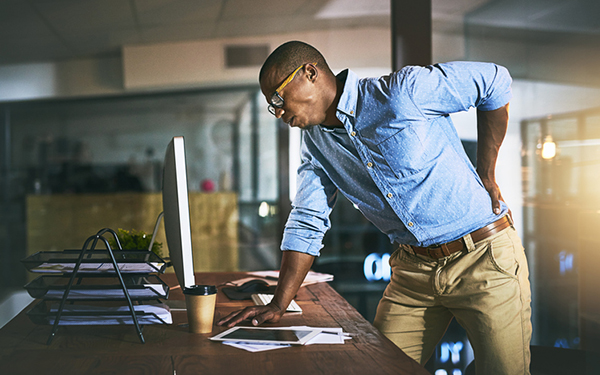 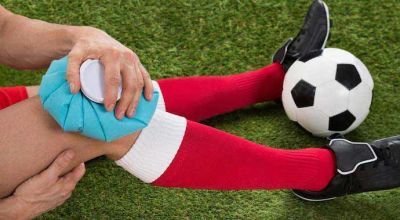 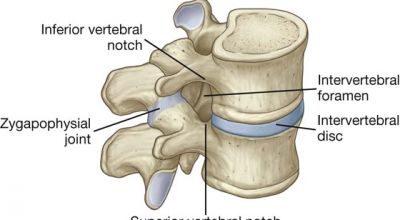 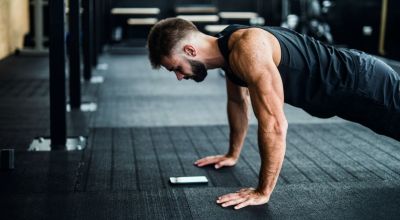